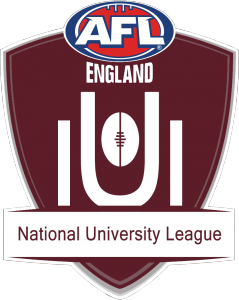 17th August 2018 – AFL England are committed to growing the game of Australian rules football up and down the country; from grass-roots and junior projects, to major regional London, CNE and Southern leagues.

That is why we’re delighted to announce the launch of the National University League (NUL) featuring teams from Oxford, Cambridge and Birmingham University, with a view to expanding to include sides from Cardiff University, Cardiff Metropolitan and the University of South Wales.

The first season will start this autumn and run from November through until March. The league will use the same nine-a-side format used in major competitions such as the Euro Cup, AFL Europe Champions League and Fitzpatrick Cup, and will run on a home and away ‘carnival’ format, so as to give teams the chance to socialise and enjoy the game together.

There will be both men’s and women’s competitions which will take place on Saturdays on ovaled rugby pitches. The current provisional schedule is as follows (dates subject to change):

AFL England President Jason Hill said that he was pleased to finally reward the enthusiasm of the university sides and give them their own competition.

“Our university teams continue to grow year-on-year. For too long they’ve had to make do with occasional friendlies with club sides from around the country, and now they have a proper league to compete against one another in.

“Three universities may not make it the biggest of leagues at the outset, but we know for sure that there is an appetite at other universities to form teams. We hope the introduction of the league will not only give Oxford, Cambridge and Birmingham more competitive match experience but also that it will lead to more sides popping up and joining the league.”

The university game is thriving, with annual men’s Varsity Game between Oxford and Cambridge in its 98th year, making it the oldest regularly played Australian rules fixture outside of Australia. 2018 also saw the very first women’s Varsity Game. Also, in 2018, the Birmingham women’s team took home the Haggis Cup and Birmingham Aussie Rules President Matti Darowski said that he was thrilled at the prospect of a university league.

“With a large number of students wanting to try something new every year, I think that promoting the sport at universities is one of the best ways to expand the sport in the UK,” said Darowski.

The Birmingham university side was founded in 2009 and has since developed a reputation as one of the most important teams in the country for developing young players, both male and female. The team has seen current players and alumni reach international level or higher.”

“In recent years we have played Oxford and Cambridge in friendly games several times each year,” said Darowski, “But it never felt like the results mattered that much.

“The fact that we’re now playing for silverware just adds to the rivalries between the three university clubs. It’s fantastic that both the men and women will have this opportunity, and we cannot wait to bring the title back to Birmingham!”

Mitchell Robertson from Oxford added “Scheduling matches against other sides has been one of the most challenging tasks for us as a university club. We look forward to AFL England’s establishment of a proper fixture list for the upcoming season.”