In the latest article focusing on our ‘All Ages, All Stages’ initiative, we spoke to AFL Wales president James Gibson about his efforts to grow the game over the bridge, as well as his involvement with the Cardiff Panthers helping to set up the Universities of South Wales side that participated in the inaugural National University League season. 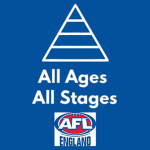 Named as AFL Wales president in 2009, Gibson says that he has a strong passion for the game and seeing it grow in Wales. Gibson has a strong involvement in the Cardiff Panthers as both a secretary and a player, and following their success in creating a ladies side in Wales in 2016, they decided that they were up to another challenge in creating both men’s and women’s sides in time for the first NUL season.

“Thanks to a superbly driven bunch of players at the Panthers we were able to get to a number of sport fayres in the local Cardiff Universities and encourage a large number of additional players beyond our already growing number of students that were involved in Panthers.

“We had no expectations from the teams we were just pleased to be competing and providing further opportunities for more people to be learning and enjoying the game! It was great to see the improvements of both teams throughout the season and the friendships it also created.”

Gibson says that he saw players rise to the challenge associated with this new team, helping to coach and drive the idea to fruition.

“Aisling Kelly, one of our now University Presidents was instrumental in finding a training venue and pitch for the first season. This was one of many amazing people with the same vision and attitude to make the first season such a success for us. Students really enjoyed the first season and being able to learn in a friendly atmosphere that the other university teams created.

“The NUL was a great learning experience for both our teams which culminated in the All-Stars games in Ireland.”

Several players from the Universities of South Wales sides were selected for the NUL All-Star team which travelled to play an Irish Universities side in Dublin, providing young players with their first taste of competitive international football.

“The All-Stars game provided another great opportunity for more players to be exposed to the 18 a side format alongside some quality players that have played as part of the NUL throughout the season. An excellent learning experience for those involved.

“The Welsh league only played its first ever 18-a-side game two years ago, so the Panthers as well as the other teams in the Welsh league have really benefited from the NUL through greater exposure of the sport creating more members and in turn building club sides and national sides. It has also enabled Panthers to train through the winter and expose more members to coaching. We have had significant numbers ever week thanks to being indoors and out of the Welsh rain!”

With the second season starting next month, the Welsh universities are taking “baby steps” to expand the university game.

“We certainly do have aspirations but we need to ensure that we don’t grow too big too quickly and it becomes unsustainable. Bristol Dockers are doing a great job in growing the game over the bridge and we will be welcoming them into the South Wales Universities squad this year to get them more exposure to the game whilst also boosting our numbers to ensure longevity of the squad.

“We have aspirations within Wales to eventually have a team in all universities in Cardiff as well as Swansea and Newport. This will come in time but we are excited for this prospect!”

Gibson says that other clubs should certainly consider expanding their team to include a university team, or at least support one in conjunction with their senior set up.

“Get a good working group and committee set up and talk to the university to get them on board. Planning sessions and getting the whole club involved is extremely important, as well as some good socials!”