It was a few days before she left Australia, that Ellie Moss heard words that would stick in her mind and drive her forward to ultimately being selected for the Great Britain Swans European Championship squad.

It was from her Newtown Breakaways teammate and former GB Swan Frankie Hocking, who represented her country at the 2017 International Cup and now plays for the St Kilda VFLW side.

“Hopefully we will see you on the field for Great Britain one day,” Hocking had said to Moss.

“I’ve kept those words in the back of my mind to this day,” Moss told AFL England. “It’s funny how the small offhand things people say really stick with you and drive you forward.”

After leaving Australia, Moss moved to Vancouver in Canada at a friend’s suggestion. Despite the website saying visas for 2018/19 were almost gone, within a week Moss received her visa.

“I think it was fate for me to end up here!” 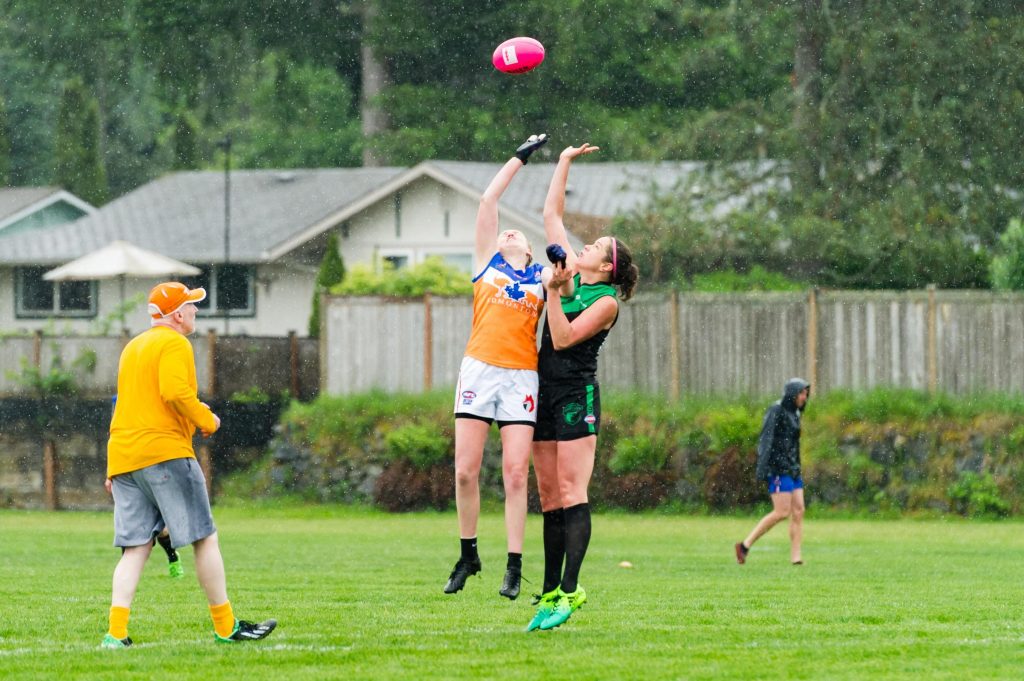 Moss now plays for the Vancouver Vixens, and is the only member of either Great Britain squad to be playing in any North American Australian football league. She predominantly plays in the ruck or at half-forward, but after rehabilitating from a leg injury she’s moved further up the pitch to full forward.

“I like being able to read the game from the goal line, and getting involved with ball-ups and marks in the forward 50.

“It’s a small league but there are awesome committee members that make it work really well. There are two teams here – the Vancouver Vixens and the Seattle Grizzlies. We also team up with some Albertan teams and US teams to get more games.

“Saying that the Canadian East Coast Women’s league is huge. I’d love to go and play over there but it’s way too cold for me!”

The Canadian weather is a far cry from Sydney where a chance encounter saw her pick up the sport up at the Pride Fair among a sea of various other sporting stands.

“I just decided to sign up to five things; whichever teams were the friendliest and welcoming I would join. I walked up to the Newtown Breakaways’ stand and Gee convinced me to play this sport I had never heard of, let alone seen before!

“My first day at their training I fell in love with the sport and never looked back. So, if it wasn’t for how friendly Gee was, I would have never been involved.”

Her footballing journey has seen her not just play in leagues in Australia and Canada, but also turn out for the Cardiff Panthers and represent the Welsh national team, the Wyverns. But keeping up to date with Welsh team games and happenings from afar is difficult.

“I’m their most distant but most committed cheerleader for sure! They’re definitely happy I’m still getting to play out here. I’m currently trying to convince the Welsh team to come on tour to Vancouver so they can see what it’s all about!”

And conversely, what do her Canadian Vixens teammates feel about being selected for Great Britain?

“I’ve only really told a few of my closet friends on the team and coaches. I think they are pretty proud and excited that I get to go home to see my family and get to play for a few weeks.”

The whole Great Britain setup approaches the European Championship with one eye on the International Cup in less than a year. The Swans will be looking to better the third-place finish they recorded on their first-ever time competing.

However, Moss has already been eyeing up some of her Vixens colleagues who play for the Canadian national side, the Northern Lights, who defeated Great Britain 4.10 (34) to 0.3 (3) in the pool stages and went on to finish second to Ireland.

“There are seven girls on the team who have played for Canada or are currently on the Canada nationals selection team. It’s awesome to be surrounded by so much talent and see what the Canadians have to offer.

“I played on a team with Hillary, a previous Canada Captain, her speed and how she reads the play is incredible. There are some really good younger Canadian girls on the team too who I’m sure would be looking at being selected in the future.”