In a new series for the 2019, we take a look at six stories from around the leagues in the very first ‘Six Points!’ Think we missed something? Email us at info@aflengland.org

Watch the Mozzies Fly Up!

Two from two is always the way you want to start your season, and that’s exactly what the Manchester Mosquitoes have done. Following their top-ten finish at the AFL Europe Champions League, the reigning Central & Northern England premiers defeated the Huddersfield Rams 236-41 in a special ANZAC Day match, before beating the Nottingham Scorpions 175-72 in a Grand Final rematch.

With the first round of the South England and Wales league getting underway, there was an all-English clash between reigning Southern England premiers the Southampton Titans and the Sussex Swans.

“The Southampton Titans sorted us out with black armbands. And with the memory of Sam on the Swan’s shoulders, they took an early lead which was held throughout the game. However, the margins were narrowed in the second and fourth quarters with the wind seemingly playing an advantage on the day.”

There were two Grand Final rematches in Round 1 of the AFL London Women’s Premiership and Conference. In the Premiership it was the Wandsworth Demons who defeated the North London Lions 6.6 (42) to 1.3 (9) to get their season off to the best possible start.

However, there was revenge for the London Swans in the Women’s Conference. After losing out in the Grand Final by a single point, they kept the Wandsworth Demons scoreless running out 2.3 (15) to 0.0 (0) winners.

In their second season competing in the Scottish Australian Football League, the Tyne Tees Tigers were on the hunt for their first victory in Round 2 after a narrow loss to the Glasgow Giants in Round 1. The Tigers were five points ahead at half-time in that one before a strong third quarter helped the Giants to victory.

However, the Tigers would have to bounce back as they faced the defending Scottish Champions the Edinburgh Bloods who had scored almost 250 points in their first two games of the season. But the Tigers defence was clinical, restricting the Bloods to two goals to lead by 22 points at half time.

And although the Bloods outscored the Tigers by five goals to two in the second half, the Tigers held out to secure their first win of the season by just four points. Just listen to them sing that song!

With the 2019 season barely a couple of rounds old, there have already been several strong performances from members of the Great Britain Bulldogs side. GB’s leading goal-kicker Andy Walkden has kicked 20 goals for the Manchester Mosquitoes from their opening two games, breaking the record for most goals in a game for his club by kicking 15 against the Huddersfield Rams.

Meanwhile, Craig Degville kicked ten against the Rams to open his account for the season.

Away from the CNE and in the Scottish league, Roy Brannigan kicked two in the Tyne Tees Tigers’ victory over the Bloods. This meant the Tigers skipper became the club’s leading all-time goal-kicker.

Junior Footy is Here to Stay

It was great to see so many youngsters having a kick before the Portsmouth Pirates vs Reading Kangaroos match in the AFL London Men’s Social league. In total, 23 ‘Mini-Pirates’ took part in the session involving kicking and handballing drills.

They then provided a guard of honour for both teams, and we even spotted some helping to keep the scoreboard ticking over as the Kangaroos ran out 14.16 (100) to 3.3 (21) winners. 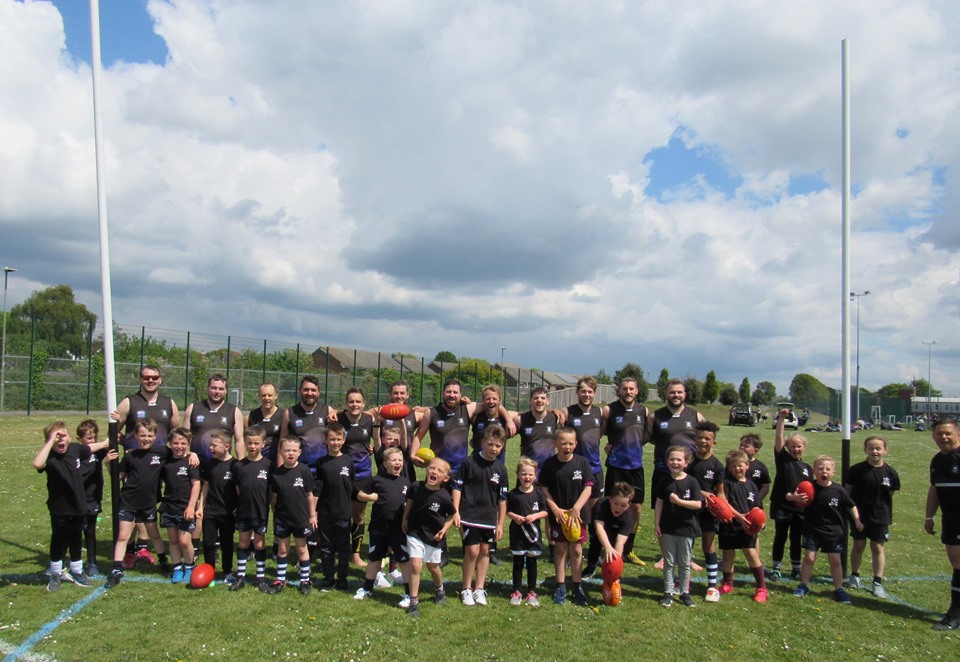