The University of Birmingham’s Theodore Wrigley has won the 2019/20 Tom Wills Medal, awarded to the “best & fairest” player in the National University League.

Having finished as runner-up last season to the University of Oxford’s Ben Doherty, Wrigley polled 13 votes across Birmingham’s six NUL games this season, two more than the Doherty.

In fact, Wrigley polled the maximum of three votes from the on-field umpires in four matches and is the only player to have received votes in every single NUL round he’s played.

“I’ve always believed sport is hugely important to meeting others at university,” said Wrigley . “I play for two university sports teams and also play campus league 6 a side. It’s always a great way to release stress.” 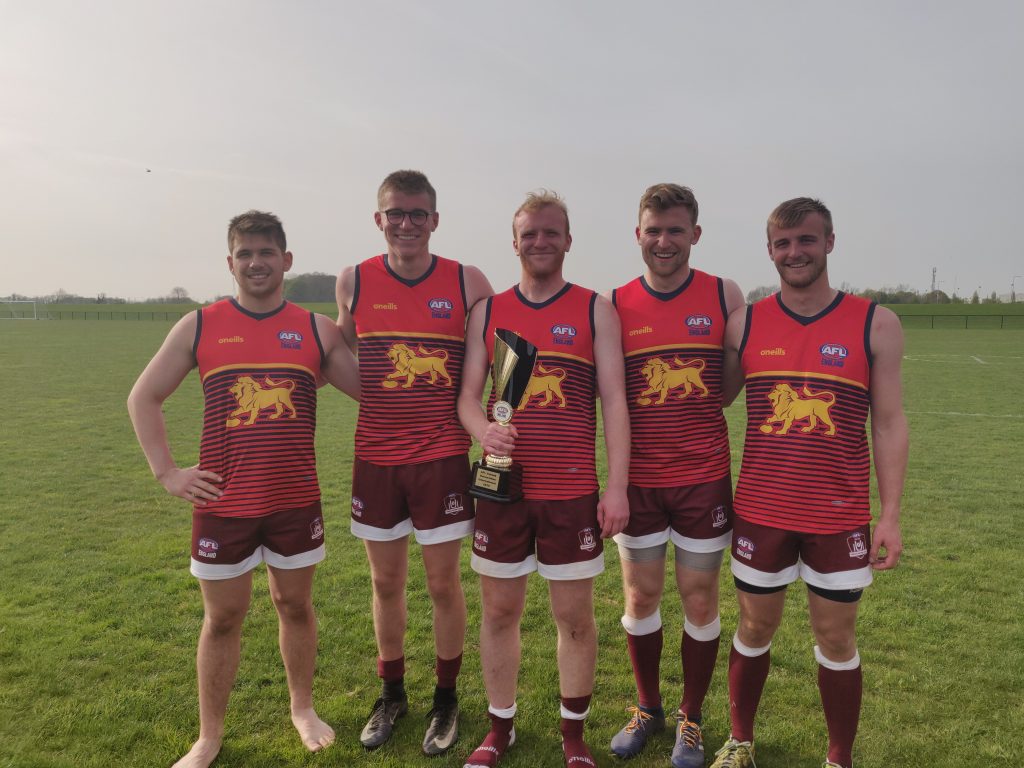 Over the last two years, Wrigley has seen the competition evolve and new rivalries and relationships between university teams strengthen.

“I played in the inaugural season, but I I think the league was still in its infancy. There were a lot more Australian players, but now I can see a lot more British players who want to get involved. Secondly I believe there is more camaraderie between teams, most likely due to the 2019 All Star Game which really served to enhance friendships between teams. I’d like to say a big thanks to Conor, Calumn and Scottie of Cardiff who always had a big smile when we saw them on match days.”

Birmingham were swept aside in the 2018/19 Grand Final, losing by 72 points to a rampant Oxford. However, this year Wrigley helped Birmingham became the first side to go unbeaten during the regular NUL season. He believes the dynamic between new and experienced players helped them over the course of the season.

“I believe the team dynamic this year, especially the connection between seniors and freshers, helped us fight for each other in all games. Three Aussie players really showed us that a quick hand pass game suited our young energetic team far greater than a kick and hope.”

The side were also helped by 6’5″ tall forward Thomas Sanders who kicked 12 goals to finish as top goalkicker in the Men’s Division and key defender Rob Morton, who were both singled out by Wrigley.

“[Rob’s]a really great friend that I’ve got a lot closer to this year, plus has been a great servant of the club for the past 4 years. His defensive prowess allowed us to keep on the front foot in all games. And having Tom up front really helped if we opted to kick long.” 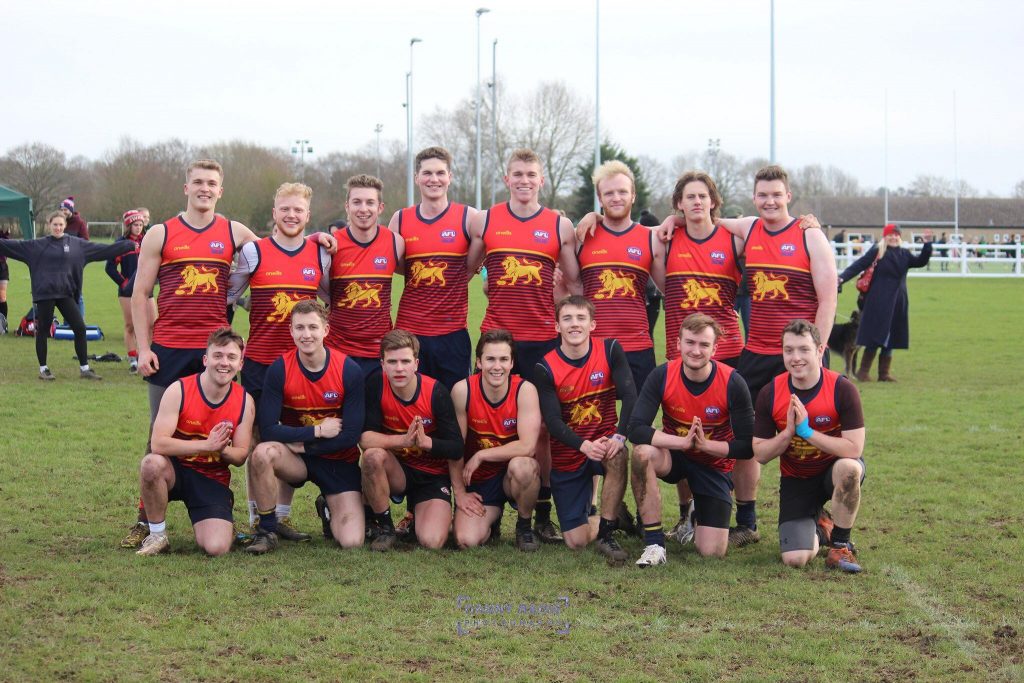 High points this season for Wrigley included their first games of the season, which saw Birmingham record resounding wins over Cambridge and South Wales, as well as revenge on Oxford which set up their assault on the minor premiership.

“For a lot of the new players playing at home in Birmingham, under the lights of Bournbrook, with a capacity crowd really showed that the Australian rules football game in England can be respected and is really exciting to watch. Additionally after losing in the final against Oxford last year, beating them for the first time in Cardiff really placed the thought in our minds that we might stand a chance of winning this year.”

With the NUL Grand Finals postponed until further notice, Wrigley says he has several aspirations aside from the NUL, having played for the Wolverhampton Wolverines.

“As a club close to the University we’ve really tried to build a connection between the Birmingham and [the Wolverines]. They have a couple of GB stars Craig Degville, George Dibble, Ross Denton and Adam Morris who really helped to improve my game. If I move to London I’d love to play for North London Lions as they seem to have a lot of Birmingham alumni and a great club culture.”

Wrigley is looking forward to a senior call up for Great Britain, following in the footsteps of fellow Birmingham player Sam Walon who made the step up from the NUL to the Great Britain Bulldogs in time to compete at the European Championships.

“I managed to be invited to train with GB last year,” said Wrigley. “Of course I’d love to get a senior call up for a game at some point. I’m putting in the miles while the season is off so I’m in top shape when football returns.”

It was a three-horse race for much of the season, with Oxford’s Cameron Sharp kicking eight goals over the season to finish as runner-up, with Cambridge’s Tim Shepherdson kicking six en-route to a Grand Final rematch against Wrigley.

Here we can reveal for the first time how the umpire’s voted and how the Tom Wills Medal race unfolded! 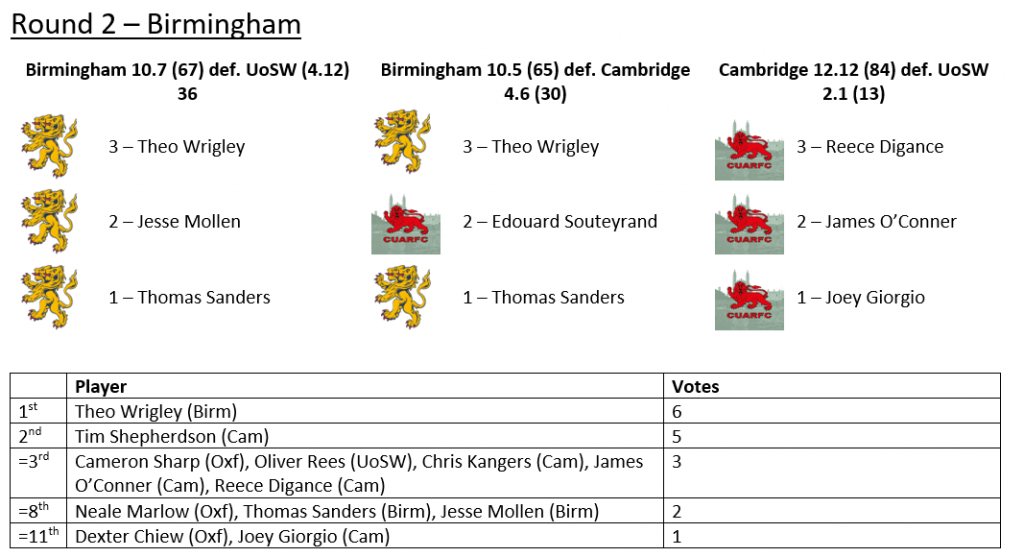 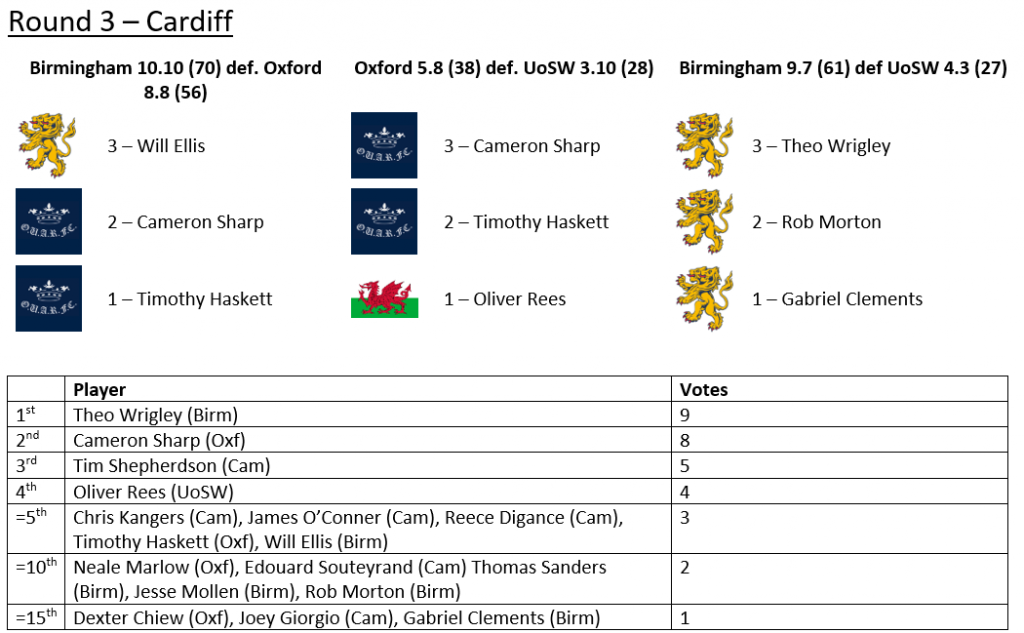 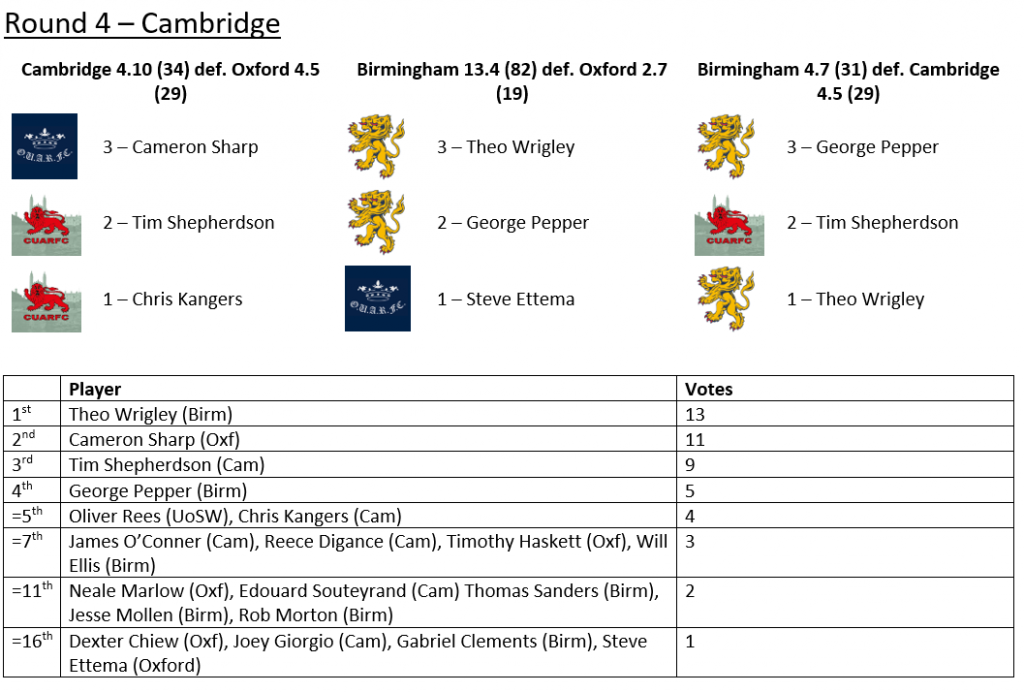