Another AFL London season is in the books and the champions of the remaining four divisions have been crowned on Hackney Marshes. We’d like to take the opportunity to congratulate all the players and coaches, and a huge thank you goes out to the medics, physios, umpires, volunteers, friends and families, and everyone else who has helped make the season another great success.

Here are our reports from the AFL London Grand Finals this afternoon.

Men’s Social: Demons Make It Five In A Row 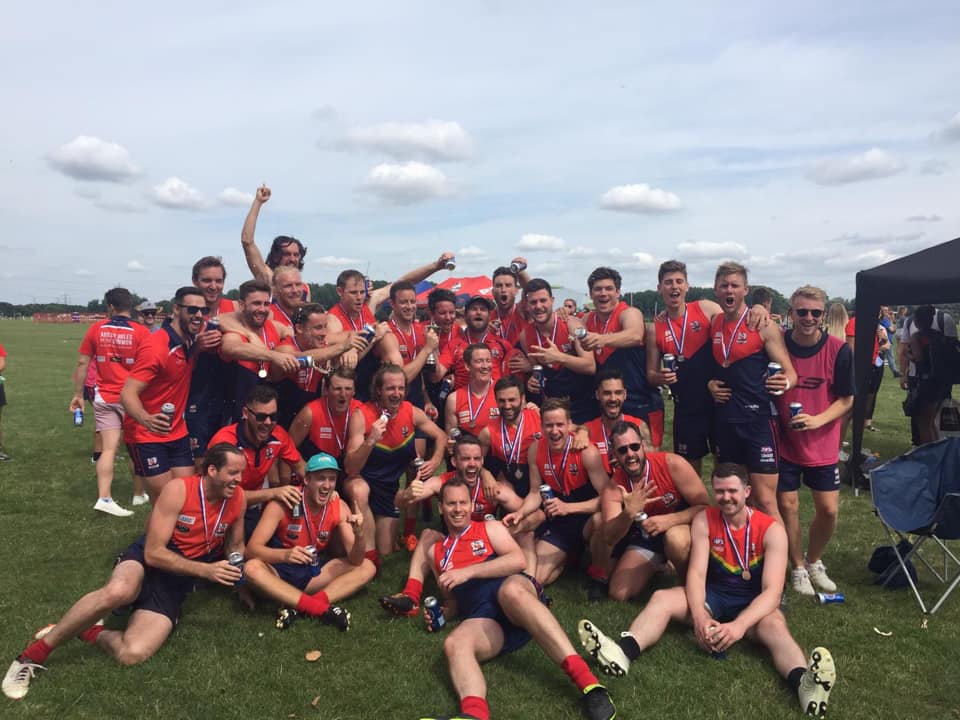 In the Men’s Social Division there was a fifth consecutive title for the Wandsworth Demons as they defeated the Ealing Emus 2.12 (24) to 1.10 (16).

The minor premiers made it through the regular season undefeated before comprehensively defeating the Reading Kangaroos 103-58 in the Qualifying Final to reach their ninth Men’s Social Grand Final.

The Emus finished fourth on the ladder, and defeated the North London Lions 24-21 in a tight Elimination Final, before seeing off the Reading Kangaroos in the Preliminary Final to make their first Grand Final since 2015.

It was a cautious start to the match, with neither team kicking a goal in the first period, and it was the Demons who kicked the first major in the second quarter to lead by eight points at half-time.

The Emus were racking up the points and the Demons lead had grown to 13 points with one period left, but in the end the Emus were left to rue some wayward kicking as they missed out on their first title since 2014.

However, since then they’ve made the Division their own and will be yet again the team to beat come the 2020 season 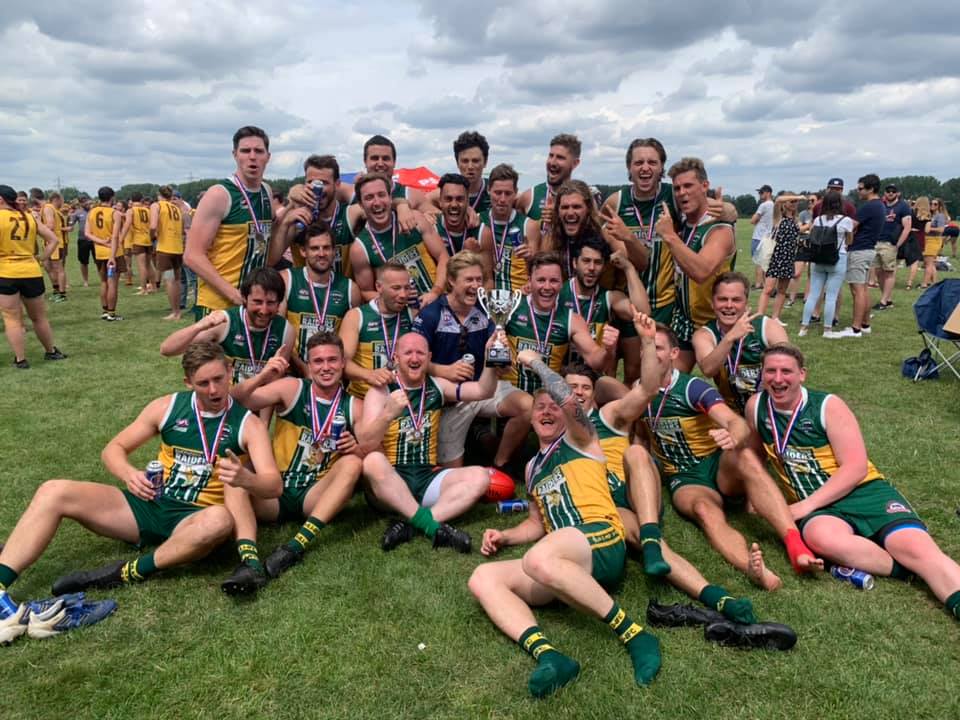 The Shepherds Bush Raiders put on a clinical performance to retain their Men’s Conference title, defeating the Wimbledon Hawks in their first Grand Final appearance since the 2006 Men’s Premiership Grand Final.

The Hawks were looking for their first premiership in 21 years, but were left with a mountain to climb after the Raiders kicked four unanswered first-quarter goals to move into a 24-point lead at quarter-time.

However, the Raiders didn’t have it their own way and the Hawks did manage to reign the scoring in to trail by 23 points at half-time and then by 29 points at three-quarter time.

Over the course of the game each side won two quarters each over the course of the match, but that strong first quarter from the Raiders was too big a deficit for the Hawks to overcome, and they would have to settle for second in their first season competing in the Men’s Conference Division

The AFL London Women’s Premiership trophy has a new team on it after the North London Lions defeated the Wandsworth Demons by just four points to win the club’s first-ever women’s flag.

One year on from their defeat to the Demons in last year’s Grand Final, and three years since they scored zero points against a rampaging Wimbledon Hawks side in the 2016 Grand Final – the Lions’ first – they manage to stifle the minor premiers for the second time in two weeks to win 1.6 (10) to 1.0 (6).

The only losses the Lions suffered during the regular season were to the Demons, but they put that behind them in the Qualifying Final in a tight six-point victory. The Demons then saw off the West London Wildcats in the Preliminary Final to set up a rematch in the big dance. 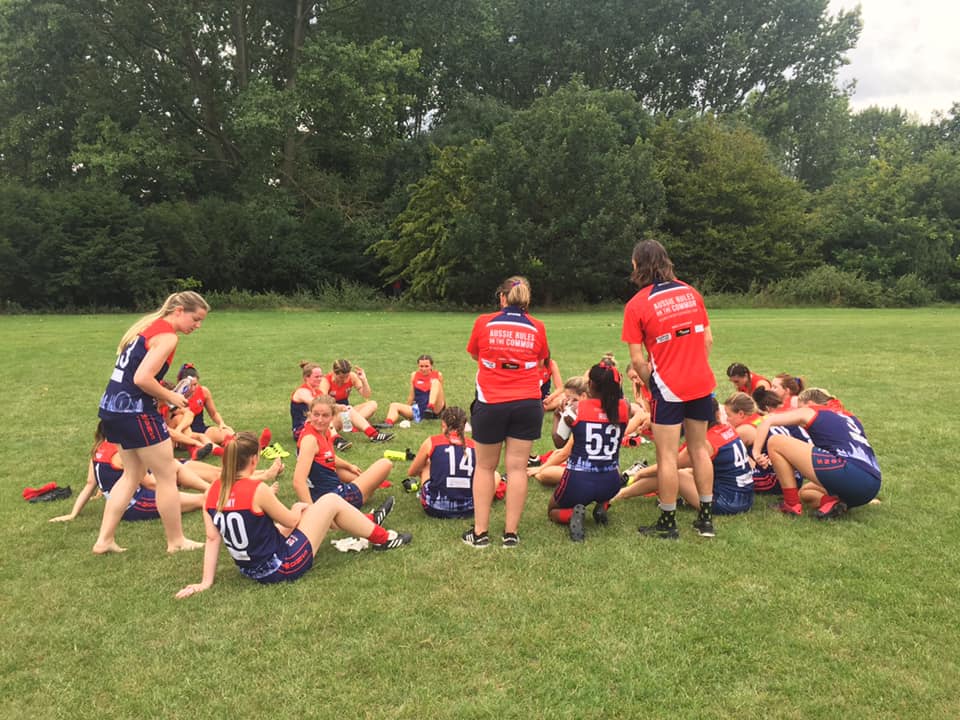 The first half was almost scoreless let alone goalless as the Lions led by a solitary behind at the break. They extended that with three more points, but the game still hung in the balance and they were still less than a kick ahead.

The Lions kicked the first major in the final term to move further ahead, and although the Demons kicked one of their own to close the gap, they couldn’t muster up a late surge to overcome their opponents and would have to settle for second, their first loss in a Women’s Premiership Grand Final after winning three of the first four.

Men’s Premiership: Wildcats Back On Top Once Again

The West London Wildcats returned to the top of English Australian Football by dominating the AFL London Men’s Premiership Grand Final against the Wandsworth Demons.

After being pipped by a single point last year, the Wildcats performed consistently throughout the match to run out winners by a score of 14.8 (92) to 3.4 (22)

The result was the Wildcat’s second-biggest Grand Final winning margin against their arch-rivals, behind only their 93-point victory in 2007. They extend their record against the Demons to seven wins from 12 Grand Final meetings.

The Demons were looking to become only the second team – after the Wildcats – to win three consecutive Men’s Premiership flags but came up against it from the first quarter.

Just like their Conference counterparts, the Wildcats started strongly, opening up an 18-point gap thanks to four majors. They would add three more before half-time, restricting the Demons to just seven points, scoring seven goals from just eight scoring shots to lead by 36 points.

The Wildcats doubled their behinds tally with the first two scores of the second half, but soon found returned to scoring ways. Their lead ballooned to 51 points by the final break, by which point there was no coming back.